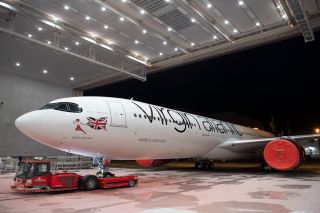 LONDON - The pandemic delayed the A330neo EIS at Virgin Atlantic. The airline is now close to taking delivery of its first A330-900. The new jets replace older A330s at London Heathrow.

London-Heathrow - Boston: Virgin Atlantic will fly an A330-900 across the pond for the first time on October 12.

Virgin Atlantic recently released pictures its first A330-900, G-VJAZ. A clear hint delivery is imminent. The airline intends to source a total of 16 A330-900s from Airbus and leasing companies.

The cabin will feature 262 seats with 32 seats in business class and 46 in premium economy. Business class will offer a lounge space for up to eight passengers and two suites with more space and privacy.