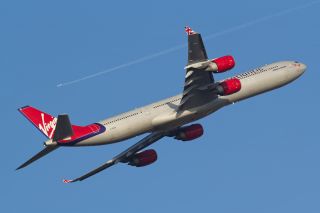 LONDON - Virgin Atlantic retired its signature Airbus A340-600 fleet. The final batch of three aircraft is on ground since March 8th at Gatwick airport. While Virgin has not officially confirmed fleet retirment, new passenger flights are unlikely as the A340s were already used beyond their planned phase-out date.

Virgin Atlantic parked all of the final three A340-600 at Gatwick Airport. The last revenue flight of the fleet was VS412 from Lagos, Nigeria, to London-Heathrow Sunday, March 8th. Virgin deployed its G-VFIT "Dancing Queen" on the final A340-600 journey - an aircraft delivered in 2006.

Virgin Atlantic replaced its A340-600 with more fuel efficient Boeing 787-9 Dreamliners. The airline extended the phase-out timeline - all A340s were due to leave the fleet by October 2019 - to replace the capacity of 787s in shop for Trent 1000 engine repairs.