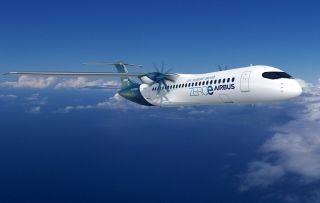 LONDON - Next-generation, zero-emission planes could be operating out of London Stansted "within the next 10 tp 15 years", according to management. The airport started a competition for the first airline to operate a zero-emission flight awarding five years free landing fees worth 1.3 million pounds.

Manchester Airports Group (MAG), the UK’s largest airport group, has fired the starting pistol on a competition for the first airline to operate a zero-emission commercial flight from one of its airports.

"Airlines taking part in the competition to win the free landing fees will be given free rein in their choice of low-emission technology, including electric and hydrogen technology," the airport said.

It comes after global manufacturer Airbus last month revealed three concept ZEROe hydrogen powered commercial aircraft, which could carry up to 200 passengers from the UK across Europe from 2035. The first commercial-grade six-seater aircraft powered by a hydrogen fuel cell was also showcased at Cranfield University in September.
© aero.uk | Image: Airbus | 01/12/2020 08:27