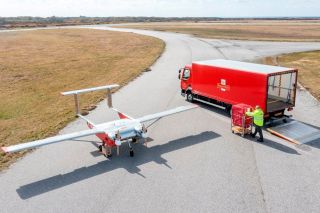 This week, Royal Mail announces a trial of the first out-of-sight, autonomous scheduled drone flights between the UK mainland and an island.

The trial will see the Company use Uncrewed Aerial Vehicle (UAV) flights to deliver Personal Protective Equipment (PPE), COVID testing kits and other mail to the Isles of Scilly.

The Government-funded project, which has been developed in partnership with DronePrep, Skyports, Consortiq Limited, University of Southampton, Excalibur Healthcare Services and Windracers Limited, will initially have a particular focus on helping to fight the pandemic by delivering crucial PPE and testing kits to the islands’ most vulnerable and remote communities.

Vitally, the 1hr journey can be flown when regular planes are unable to.

, © Royal Mail
The Windracers drone is also able to accommodate mail of most shapes and sizes, enabling more general mail to be transported to the islands as part of the trial.

"Parcels will be flown to the islands’ airport in St. Mary’s, by a UK-built twin-engine Windracers UAV, which can carry up to 100kg worth of mail at a time - equivalent to a typical delivery round," Royal Mail said. "A smaller VTO drone, operated by Skyports, will then be used to transport items to a number of delivery points throughout the islands."

The autonomous flight route that the UAV takes involves being roughly 70 miles out of sight before it reaches its destination.

The UAVs will complement existing forms of transport for mail to the Isles of Scilly. They are able to fly in poor weather conditions – including fog - as they are uncrewed and not dependent on tides. This could potentially make them well suited to help Royal Mail better service remote island communities.
© aero.uk | Image: Royal Mail | 11/05/2021 09:37