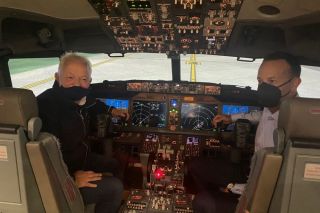 DUBLIN - Ryanair laid the groundwork for recovery and expansion with the opening of a new 50 million Euro training center in Santry, close to Dublin Airport. The Irish low-cost airline consolidates training operations under a new agreement with Airline Flight Academy (AFA) and announced a hiring spree.

The new Santry Training and Simulator Centre contains three full motion simulators - one for the 737 MAX and two for the Airbus A320 - along with with two fixed base simulators.

Access to these new facilities will enable Ryanair to recruit and train over 5,000 new pilots, cabin crew, engineers and ground operations professionals over the next five years. Ryanair confirmed plans to grow its fleet to 600 aircraft by 2025 to support up to 200 million passengers per year.

Ryanair Eddie Wilson mulled plans to include additional training centers into the recruitment drive citing a Ryanair preference to recruit and train "native" Ryanair staff from the beginning of their careers.

Ryanair has chosen Airline Flight Academy to be its exclusive cadet training partner. "Under this agreement, Airline Flight Academy will operate and run the Training Centre, and will play a central role in recruiting the next generation of aviation professionals, including pilots, cabin crew, engineers and ground operations professionals for Ryanair’s next phase of post Covid growth and expansion," Ryanair said.
© aero.uk | Image: Leo Varadkar | 15/09/2021 13:19