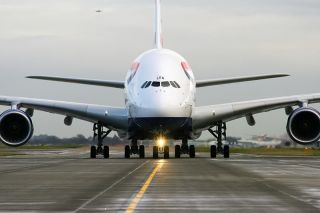 FRANKFURT - After more than a year in storage, British Airways restarts A380 operation with crew familiarization rosters on short trips within its European network. On Monday morning, the A380 G-XLEF went on the BA902/903 rotation from London Heathrow to Frankfurt and back.

British Airways A380s are gearing up for an eventual return to long-haul service after more than a year in storage in Madrid. The first round-trip to Frankfurt marked the return of the fleet Monday.

British Airways plans to put the four engine aircraft on routes to the U.S. and Dubai next month. For now, British Airways is bringing back four A380s from storage. In the medium term, the airline plans to return all twelve A380s of its fleet to active duty.
© aero.uk | Image: British Airways | 08/11/2021 14:17