Ryanair to pay compensation for 2018 strike 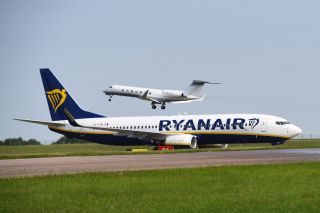 LONDON - A 2018 strike affected thousands of Ryanair passangers. After fighting a legal battle the airline will finally pay out compensation.

In January 2022, following action by the UK Civil Aviation Authority against Ryanair, the Court of Appeal decided that strike action by airline staff was not an "extraordinary circumstance".

Following that judgment, Ryanair secured permission to appeal the decision to the Supreme Court. "It has now decided not to pursue this appeal and to provide compensation to passengers who were disrupted by the strike action taken by Ryanair pilots in 2018 in line with the passenger entitlements set out under UK (EC) Regulation 261/2004," the CAA said.

The airline had a weak case after the court established pre-Brexit EU regulation would apply.

"The Civil Aviation Authority undertook enforcement action against Ryanair due to the belief that strike action by airline staff does not constitute an extraordinary circumstance", CAA Consumer Director Paul Smith said. "The judgment by the Court of Appeal supported this view."

Ryanair’s decision to discontinue the Supreme Court appeal of the Court of Appeal judgment means that affected passengers will now be able to make a claim for compensation from Ryanair if they were impacted by strike action taken by Ryanair pilots in 2018 and we would encourage all passengers on flights that were affected to claim the compensation they are entitled to.
© aero.uk | 13/12/2022 09:48